ComRes have produced a poll for the Independent and the Sunday Mirror. It is, somewhat ludricously, described as a “Favourability Index”. It asked 2,017 adults their view of a number of politicians. It was Tweeted by ComRes as showing that Theresa May has now overtaken Boris Johnson as the nation’s favorite politician. The full results are below:

It is good news for Theresa May, not just that she has overtaken the ManChild she appointed Foreign Secretary as the most popular politician, but because it shows the depths of Labour’s problems under Corbyn/McDonnell.

I have no doubt that supporters of Corbyn will highlight the fact that 22% of those asked viewed Corbyn with a favorable opinion, as compared to only 11% prepared to express a favorable opinion of Owen Smith. But that is not the full story. The first part of the story is that the Labour Party’s problems are not about the “coup” or divisions in the PLP. This is about Corbyn and the fact that he personally is trailing the Prime Minister, the ex-Prime Minister and Nigel Farage.

Now I appreciate that Smith is behind them all, but Corbyn has been in place now since September 2015. He is the man who packs out public meetings. He is the man who is going to change the face of politics in this country. And yet his appeal is so limited.

Is Owen Smith the answer? Take a look at the “Neither” or “Don’t Know” columns. Corbyn has a combined total of 28% that have not expressed a view about him. Smith has a total of 64%. That provides Smith with a much wider pool of people on whom he can make a favourable impression. 50% of the respondents already profess an unfavourable view of Corbyn, a figure only beaten by Farage and Trump.

Corbyn has a higher percentage of unfavourable views than Cameron. Let that sink in for a moment. Corbyn is less popular than Cameron, the man who lost the Referendum.

That does not make Smith the answer of course, but it provides him with a better prospect of success than Corbyn.

The second part of the story comes with another poll. This one is a YouGov with another ridiculous title of “Issue Ownership” – basically which Party is trusted over key issues. 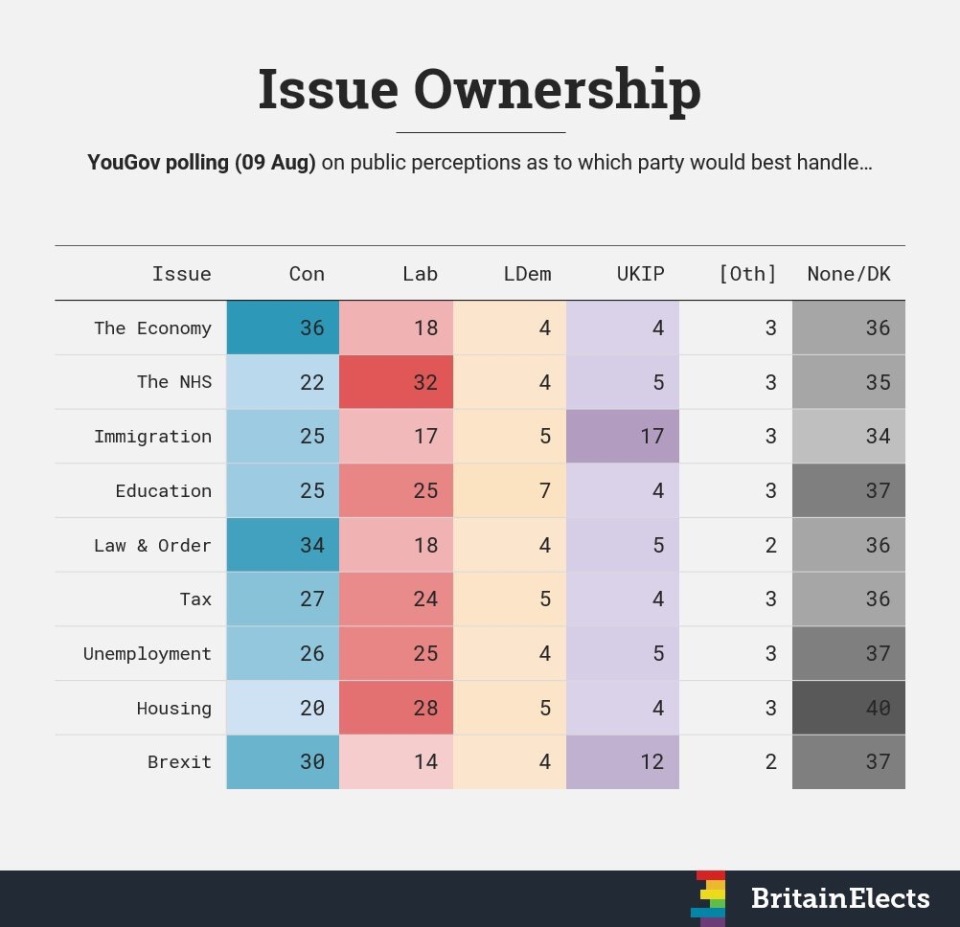 Everyone knows that the economy is one of the key battlegrounds for an election. The numbers are bad for Labour. 36 plays 18. That is a huge gap for Corbyn and McDonnell to make up. Will they manage it? Will the nation learn to trust a prospective Chancellor who produces Mao quotes in his Budget response?

Let’s go back to the “Favourablity Index”. No one, not a single figure in the table, is doing worse than McDonnell. Donald Trump manages more favourable responses. That is the man with the hair, the gaffes and the racism. He is more popular.

Polls can be wrong. These polls reflect my own views. I was favourable towards Corbyn and McDonnell. They have lost me and are losing many others. They are an unelectable ticket.

If you want the Labour Party to change, to represent a more socialist and left voice then so be it. Argue for it and be honest about it. But don’t proclaim the politicians currently viewed as those who can deliver it are showing any signs of being an electable alternative to the Tories. They are not.